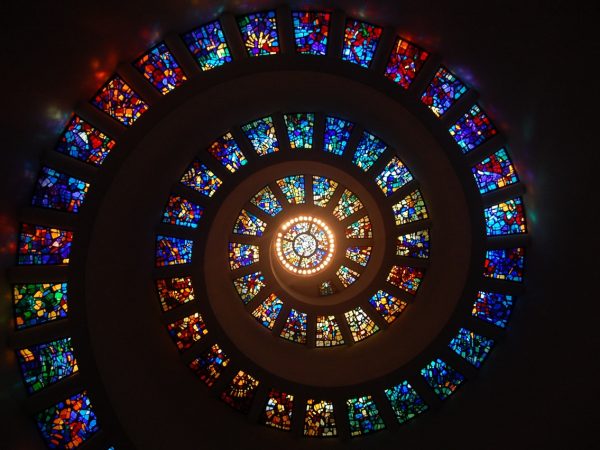 Image from Pixabay on Pexels.com

Listening to the music of the spirit; dancing with the creator; accepting the invitation to join the eternal pattern woven by the trinity: We were reflecting on this in a small group the other day. What a beautiful picture it conjures up, for though the Divine can’t possibly be captured on mere images, yet human as we are, we’re gifted with an imagination that we use to try to express the inexpressible and indefinable essence of God.

How would you see this? What kind of picture would you paint? Is there an image that speaks to you.

One image I’ve found helpful is that of the trinity: Father, Son and Holy Spirit caught up in a dance of creation; forever weaving an intricate pattern together and inviting us into this circle of life as co-creators. Our task in this life (and beyond) is to accept this invitation and to discern our unique contribution to this heavenly dance. I do so wish I could translate this into a tangible picture; In my mine’s eye I can see the three persons of the trinity caught in the centre of an ever expanding and intricate woven pattern, like a delicate yet exquisite shawl or maybe an even more intricate geometrical spirals (Do you remember those Spirograph sets we had as children?).

Of course this path doesn’t always run smooth; my dance has often been more slow-slow- quick-quick ouch than a heavenly waltz but no matter. Here’s a few of my past reflections about my spiritual ‘corns’ from some years ago:

“God is the lead dancer and the soul is the partner completely attuned to the rhythm and patterns set by the partner. she does not lead, but neither does she hang limp like a sack of potatoes.” (Thomas Merton, quoted in Listening to the Music of the Spirit: The Art of Discernment, by David Lonsdale: Notre Dame, IN: Ave Maria Press, 1992)

“The thorny issue of discerning God’s will is mentioned but not examined. The author is forthright in saying we would “be fools to believe we knew God’s will for certain.” Yet the sense of seeking the will of God hovers around much of the spiritual journey he maps. Do we pray to find definite guidance, even direction, for the decisions we face? Or do we pray for courage and wisdom to make those decisions for ourselves, and so take the responsibility for the consequences instead of blaming them on God?” (Peta Dunstan in  Church Times review of Deep Calls to Deep: Going further in prayer by David Foster, Continuum, 2008)

As my course moves into a new phase, the ‘green’ tinge remains, but readers might notice  the not so  much dreaded as ever-fascinating ‘D’ word moving to the forefront. I’ve never been one of those people who to think that God micromanages one’s life down to what colour socks to put on in the morning. However, the tricky issue of maintaining the delicate balance between trusting that God’s will will be done and individual responsibility is one that’s kept my thinking cap in constant use these last few years.

A friend put me on to Listening to the Music of the Spirit last week, and I’m finding the imagery of  God as the lead dancer in co-operation with the soul really speaks to me, resonating as it does with recent experience. Looking back through old photos (our silver wedding comes up in a few months time) at a rather scared looking younger self being steered up the aisle on the arm of my father – reminds me of the co-operation, trust and teamwork  that’s needed in any sort of partnership, especially, as I discovered, if one of you is taller than the other. Beneath the yards of tulle a tug of war was taking place, as I made determined attempts to loose myself from his well-intentioned but rather too firm grip, (think old Victorian portraits a la aspidistra and you’ll get the picture), turning what should have been a dignified glide into a sort of hop, skip and jump more often seen in a three-legged race!

Or if you’ve ever performed that perilous square dancing move the basket, when by supporting themselves with arms round the shoulders of the men, the women should be twirled round in the air. In my (admittedly limited experience) the move generally ends up more like this:

Women who do not want to go flying can a) push down with their elbows, b) keep the basket slow by tripping up the men, c) grab the men round the neck to strangle them or `accidently’ digging a thumb in under the ear or d) determinedly lean back. Most `respectable’ dance clubs prefer to keep the women under control (which leads to a faster basket); the barn dance crowd likes to show off. I leave it to the women to say whether they want to go flying, and don’t do it at all in a crowded room since flying feet are quite heavy weapons.

Armed with this wisdom, I’d like to think that my dance   with God will take on all the purpose, skill, certainty  and championship quality of  these people. Sadly, knowing myself only too well, I fear the reality will be more like the scenario here!

To the young retreatant @Beunos who slowed her brisk pace guiltily on seeing me approach the other day...1/

Did I just catch something in R4 about The Wombles making a comeback?!
#greening, #climatechange

...with the emphasis on ‘rain.’ Good morning all.