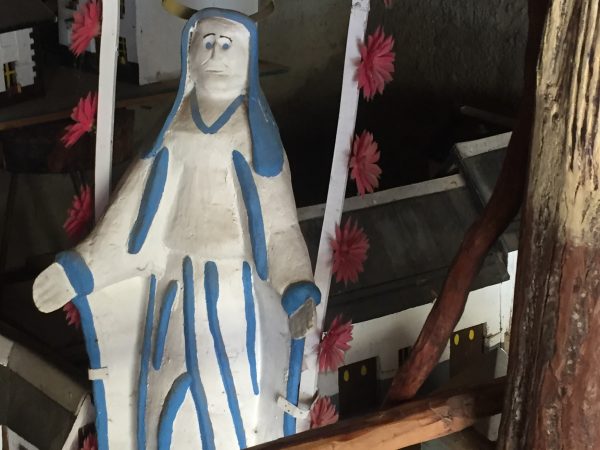 So – in the church calendar, today’s the time for us to look at the role played by Mary, mother of our Lord. I’ve blogged about Mary several times before; probably more specifically from the viewpoint of the Annunciation, where I love to search out more contemporary imagery and writings. It helps me bring the narrative out of the old, over familiar context of childhood Sunday school Bible stories and into the present reality. After all, at the beginning, she was what we’d now consider to be a teenager, and who doesn’t remember the complexities and struggles of life then?

The writings of Rachel Mann, for example. Listen to this monologue in the voice of Mary, from A Star-Filled Grace. This is no romanticised, sanitised portrayal of a being far removed from the complexities of this world; more a stunned realisation that your life can change direction in an instant and from now on will never be the same.

On a lighter note- do indulge me on another trip down Memory Lane. Yes – I’m thinking about school again. It must be a sign of getting old, along with the ghastly recurring dreams of sitting an exam you’ve forgotten to revise for. Here’s the wonderful Gustav Holst setting of Ave Maria. I remember singing this as a teenager at school way back in the 70’s . We’d been practising hard, had performed it a number of times that summer and had pretty much got it note perfect. Then came the annual school prize giving and, as the programme was confirmed it seemed something was not quite As It Should Be. Heads were shaken. Discussions were earnest. Confabs were…err…confabbed. As much as we could gather anyway, but then at that age we were probably more concerned with the latest goings-ons of Rod Stewart, Queen and the Bay City Rollers than the subtle nuances of theology and churchmanship.

You see – we were a church school; a Church of England School. Praying to Mary was just about acceptable, Sancta Maria, but Ora pro nobis? Asking the BVM to pray for us, (sinners or no), now that was a different matter. Shock horror! There would be school governors present on the Big Night. VIPs. Who knows what they might think?

So the verdict was delivered from on high. No, not that high; from the headmistress; probably the nearest personage we had to the Almighty himself. No praying for us sinners. We crossed out the offending phrases and bunged in a few extra Sancta Marias instead. And on with the show! No doubt we looked (and sounded) suitably angelic, like the nicely-brought up Young Ladies that we were.

Though in subsequent performances, each time we approached the ‘dodgy’ bits, there were always a few hesitations and deviations. Still, everyone was happy.