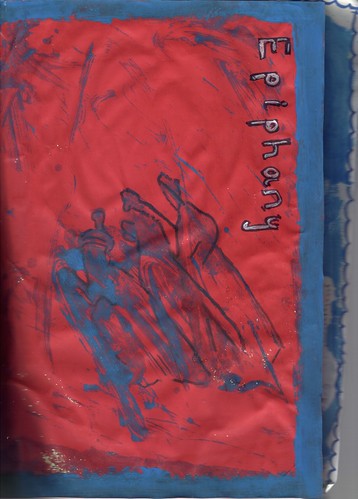 …Treasure and Travel, all qualities needed on our journey.  I’m thinking here of the magi, Kings, astronomers- whatever  you want to call them.  Even  if you take their story on a mythical rather than a literal level, I’m sure we can all identify with these strangers as they set out into the unknown, discerning  the signs, trusting that the star would lead them  to their final destination. Maybe not always entirely understanding why or how the journey was going to unfold , but holding on to the knowledge that they were called. Their treasures, so carefully carried along with them: gold, frankincense and myrrh, symbolic of Christ’s kingship, his priestly role and a foreshadowing of his death.

The journey through Advent  won’t always be straightforward. More often than not matters don’t go as we envisaged , or as we would like . ‘Life’ keeps getting in  the way, we get caught up in the frenzy of Christmas prep, the unexpected strikes: an illness, bereavement or even just a domestic crisis like a broken down boiler or burst pipe! So off we go in a completely different direction. We try hard to conjure up the Christmas spirit  at the ‘correct’ time but it doesn’t appear neatly to plan (Did the Magi have a bullet journal, I wonder? I think not!)

After all, they ended up returning home by a different route, having been warned in a dream of Herod’s murderous intentions. (I’ll bear that in mind when next my train is delayed!)  Thank goodness there weren’t GPSs back then. Can’t you  just imagine the conversation:

I said turn right at the next junction, continue for 500 miles and you will  arrive at your destination. No scope for intuition there!

We shall not cease from exploration

And the end of all our exploring

Will be to arrive where we started

And know the place for the first time.

3 thoughts on “Advent ABC: T is for Trust”

Our WhatsApp chat on Saturday suggests there are Creative-ish folk who will relate to this 😊 https://twitter.com/emerylord/status/1539633183267905537

A reminder that if you're looking for somewhere cool to be during this hot weather, any old stone church or cathedral is basically a natural refrigerator.

Once you’ve sung in a choir, or played in a band or orchestra, or played in any music ensemble, you’re never the same again. Your ears, your eyes, and your heart are opened up in ways not possible by any other means. Music feeds us, it nourishes us, and it brings us great joy.

Something that's come across from these Jubilee celebrations is how we're being psychologically prepared, as a nation, for what must inevitably happen in the next few years: that Paddington Bear will be the next Bond