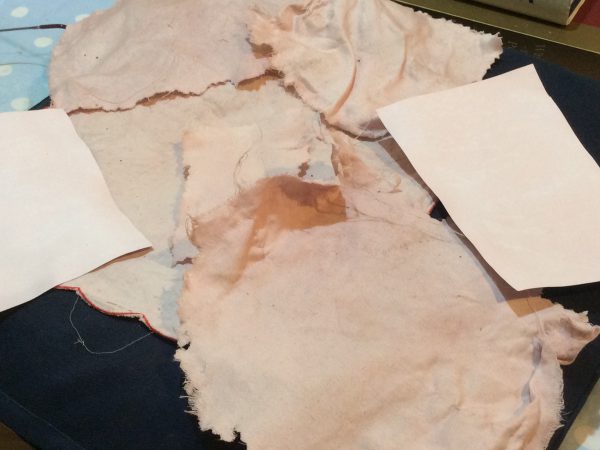 What’s the best thing about having family living a way away? You get to have two birthdays, that’s what! (No, I’m not the Queen of England, since you ask). Both ‘children’ and partners are brilliant at feeding their mother’s art supplies habit, often with all sorts of goodies that I’d either not thought about getting or that I didn’t know existed.

The pictures came about from my experiments with dyeing, courtesy of the Spring issue of Somerset Studio Magazine, a belated birthday present from our daughter. This issue had a blush colour theme, which fitted in brilliantly with several contributors’ goes at making colours by boiling avocado pits. And as luck would have it, I’m on a diet where salads feature largely, and avocados fit into the menu nicely.  So Double double, toil and trouble, I just had to have a go!

The result- (R), was…how shall we say.. ‘mixed;’ more like an anaemic salmon than the gossamer blush of a red, red, rose. The paper has actually come out a deeper shade of pink than in the photo, but the fabric, not so. Maybe I didn’t use enough pits? There are only so many avocados a girl can eat, after all, and as daughter said, “That’s an awful lot of guacamole!”

But…but, but, but…yesterday I came across an abandoned project: an old book that I’d begun to alter a couple of years ago and Abracadabra! Here’s the ideal home for my pink stationery; maybe even the fabric,  once I’ve held another session over the cauldron. The book is a vintage one about flora and fauna, which fits right in with the kind of look I’m trying to achieve. I feel re-inspired!

I’ve  also found out a little about what I think is the family of the previous owner of the book  and  am intrigued to find there may be a local connection . We’ll see. Isn’t  it exciting, though,  to imagine the  story behind the name on the flyleaf: how and why the person came across the book; did they choose it for themselves or for a child? Was it a present? Did they pass it down to children, grandchildren, nephews or nieces? Did it spend time boxed up in a dusty, musty attic before finally being donated to the nearest charity shop?

It’s exciting, too, to think that in some strange way, a little bit of them is now being taken, recreated, altered and rewoven into a new story.  Well, that’s my hope?

If you repurpose and reimagine, have you ever wondered about the history behind your creation, and does this become part of the inspiration that drives you? I’d love to hear about it.

3 thoughts on “In the Crayon Box 3: Altered Books, Birthdays and Avocados”