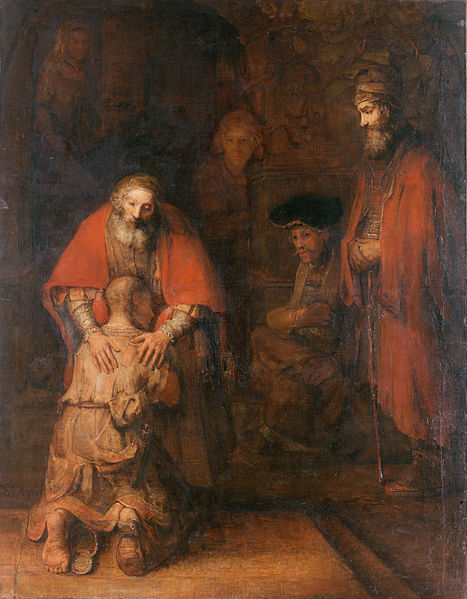 For Ash Wednesday:  here’s another ‘prayer monologue’ written during The Exercises. The Prodigal Son has returned home. Big brother is not happy and lets the world know in no uncertain terms!

That just about takes the biscuit that does.

Of course I knew it’d happen. Too soft hearted you are. That boy has got away with murder…well, not literally, though I could tell you a thing or two about your precious boy that’d make your hair (well, in your case – your beard) curl, but I digress…

Who was it, may I ask, who had to put up with Master Perfect, Little Lord Fauntleroy and his delicate constitution, his temper tantrums and sneaky ways? I’ve still not forgotten that time he tried to drown the cat. ‘Experimenting,’ he said, ‘Trying to find out if Tibby could swim.’ Of course I got the blame for ‘not looking after your poor little brother.’ Why’d he always have to be tagging after my friends and I after school? All that fun I missed out on because he couldn’t keep up…Hah! Rubbish! Dangle the prospect of a new pair of football boots or a Nice Fat Inheritance in front of his nose and he’d move faster than Usain Bolt in the 100m!

And now … after he’s calmly fiddled ( I use the word advisedly – but I won’t go into all the rumours ; they’d only make your hair go grey…oops! I meant greyer) away your estate, he has the cheek to come crawling back, stinking of pigs and kowtowing to you, putting on the charm. Very affecting little scene that was I must say: a real Oscar- winning performance. Dickie Attenborough, eat your heart out! Onions I say, onions! It’s an old trick; you must have smelt them, or maybe you couldn’t detect anything for the overtones of Parfum de Cochon?

Great sight to come home to after the day I’ve had, I must say; risking life and limb 40 feet up on a pile of scaffolding, shoring up the wonky chimneys at that socking great mansion down the valley. I need danger money! Any money actually…When did you last pay me, or are you losing your memory along with the grey hairs? As for a party…if only…

And you expect me to just down tools and embrace Mr Stinky Prodigal as if he’s royalty come to visit? Pull the other one! (Oh – and talking of pulling…but no… I’ll not lower myself to his level).