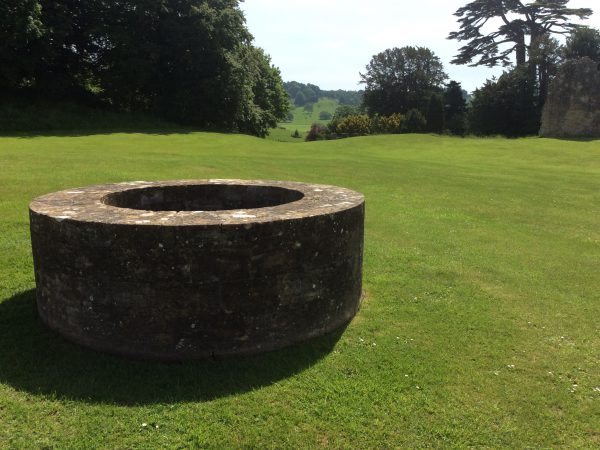 Sherborne Old Castle, 2017Here’s one of what I’ve called my ‘prayer monologues.’ It’s based round the familiar account in John’s gospel of Christ’s meeting with a Samaritan woman. More significantly, it tells of her life-changing encounter with Christ.

We leave her as throwing caution (and her water jar!) aside, she rushes back home to share the good news with her fellow villagers. I imagine it was the beginning of a longer journey for her, a process less of being,  more  of becoming. Change is always challenging, (in my experience, anyway). Being a person of faith doesn’t guarantee an easy ride through life.  Yet with her ‘internal compass’ now pointing true North, she can begin living true to her authentic self. Freed of the labels placed upon her not just by society but by her own woundedness and lack of self-esteem.

My version of the story was ‘incubated’ during the Spiritual Exercises and is still very much a work-in-progress. As is life.

It’s also been influenced not a little by the wonderful monologues of  Edwina Gately and Denis McBride.

I was never going to be “in with the in-crowd,” now, was I? For you Myers-Briggs practitioners think INFJ. Please don’t ask me to elaborate; just thinking of all those dominant, secondary, auxiliary, inferior and tertiary functions makes my head spin! ‘Inferior’ will do nicely, thank you. Let’s face it- “a woman from Samaria” is never going to be flavour of the month, is she?

Oh, and incidentally, what’s wrong with calling me by the name I was given at birth? What’s with all this labelling by Type of Unfortunate Affliction? ‘Samaritan Woman,’ Woman Bent Double,’ Syro-Phoenician Woman,’ ( and you thought ‘Samaritan’ was bad enough).

As for ‘Woman With Haemorrhage…’ Shock, horror! Unclean, Unclean! Don’t even begin to think about it, move on pronto, as the disciples were all for doing, had Christ not intervened.

For he gave me a name. Well, OK, he nearly fell down on that one: “Woman” indeed! (Sigh…) Never mind, we must allow for contextualisation, as they say…

But yes- that day we met by Jacob’s Well, ( no, no! not the one in Surrey!) he called me personally.

To me, me a mere:
Woman (poor Eve, so unfair)
A Samaritan
Veteran of five husbands and one ‘ bidie – in.’

You see, if there’s a worse sin than sinning in suburban Sychar, it’s not fitting in. For a woman at least, refusing to conform to society’s expectations, not slotting into its neat little boxes, doesn’t help your cause in the popularity stakes. These appear to be, in descending order of priority:

– Educated Career Woman: That sainted Superwoman and Pinnacle to which We Must All Aspire. Thanks a bunch, Proverbs Wife.

– Housewife ( SAHM), as I believe you call her ( or even him, bless him) nowadays. Just about acceptable…on a strictly temporary basis.

– Worthy and Active Retired: The backbone of of our voluntary organisations and religious communities. Though if current legislation takes its course, this group could become a veritable endangered species, to be replaced by DDIH (Drop Dead in Harness).

– Dotty Old Dear: Poor Old Mum…Bless her…we love her ( really we do), but…well…she’s not quite the thing nowadays, is she? Enough said.

– Finally, lowest of the low, the SW. And it doesn’t stand for ‘Surrey Wife,’ either, I can tell you! It’s clear we’re never going to be first in the queue at the well for the latest BOGOF Blue Label offers.

Hence that morning my internal theme tune was as ever ‘Mad Dogs and Samaritan Women Go Out in the Midday Sun.’ I simply couldn’t face any more of those sniggers and whispers.

So…there I was…and there he sat…waiting for me as I waddled none-too elegantly up the pathway, varicose veins throbbing in the heat. To balance a socking great clay jar on one shoulder requires a certain elegance and deportment that’s kind of tricky to maintain when your clothes are sticking to you.

From a total stranger, definitely not from round these parts or I’d have heard. (Even I catch some of the local gossip.) “Got to be Jewish,” I thought, ” but then why is he condescending to talk….even look at me?

Well, I don’t know what got into me; sheer shock most likely , but I asked him…blurted it out. Nonsense of course; I mean- he’d not even got a bucket!

He didn’t give me a straight answer , (typical man!) Instead he began yattering on…something about Living Water; if I knew who was asking me for a drink etc… Totally weird, yet…there was something about him, about what he was promising, that cut through the bone weariness of an ordinary day, pointed to something way way beyond. It was as if we were being held out of time. Could I? Would I? Would he? Yet the thought of limitless water, there for the taking, no more shameful trips in the searing heat- was too tempting to resist. So, deep breath….after all, he can only say…

Husband? Husband! I might have known there’d be a catch. Half a sec, how did he know that? Who is this man? Quick, woman, think….ah! Got it! When in doubt- divert: let’s see- pews? Tea rota? Church boiler? I know- worship: the which, whats, whys and wherefores. That should steer us away from all this uncomfortable stuff.

Sigh…talk about a dog with a bone…he gave as good as he got. Yet as we peered into the murky depths of the well together, I realised that this was no ordinary stranger. I had a choice:

To live life rather than just exist. To seize the day- make the most of every precious moment. To accept myself as I am, known and loved now regardless of labels (real or imagined). Put simply- to worship (worth-ship- to give worth to) God in spirit and in truth.

Our WhatsApp chat on Saturday suggests there are Creative-ish folk who will relate to this 😊 https://twitter.com/emerylord/status/1539633183267905537

A reminder that if you're looking for somewhere cool to be during this hot weather, any old stone church or cathedral is basically a natural refrigerator.

Once you’ve sung in a choir, or played in a band or orchestra, or played in any music ensemble, you’re never the same again. Your ears, your eyes, and your heart are opened up in ways not possible by any other means. Music feeds us, it nourishes us, and it brings us great joy.

Something that's come across from these Jubilee celebrations is how we're being psychologically prepared, as a nation, for what must inevitably happen in the next few years: that Paddington Bear will be the next Bond